Italy is a Catholic country. Around 90% of the population – so about 57 million people – describe themselves as Catholic, although not all practice their faith. Good Friday (Venerdi Santo) is marked throughout Italy by parades to remember the Passion of Christ. Spello is no exception, so the streets of the old town were closed to traffic (a blessing in itself!) and candles were lit throughout the streets. Our entrance looked enchanting.

Entrance to the Nunnery by candlelight.

The  historic centre exhibited large paintings of each of the 14 Stations of the Cross, and this formed the route for the evening procession (Via Crucis d’Autore). The crowds (hundreds of people) followed behind the group of priests and church officials. The local mayor and polizia were also present.

One of the Stations of the Cross, Spello

The Leaders of the Good Friday Procession

At each Station of the Cross the procession halted and extracts from the Gospel were read. Then the main priest – with his microphone in hand – led the followers in prayers and singing as they walked to the next Station.

We are not religious, but we are keen to experience the local traditions, and so we joined in with the procession (though not the prayers and singing!) around the steep streets in the shadow of churches and other buildings; those stones have overseen processions like this for hundreds of years, and hopefully will continue to do so for many more. A moving evening.

And so to Spello. After 1918 kilometres (1192 miles) we were delighted to reach our destination.

The picturesque town of Spello in Umbria lies on a hillside in the shadow of Monte Subasio, which rises to 1290 metres (4230 feet) and on the border of a national park. Subasio’s distinctive rose-coloured stone was used to build much of both nearby Assisi and Spello. Spello retains some traces of its Roman past, largely in its fortifications and gateways. Under Roman rule Spello was known as “Hispellum” and the town walls with its 6 gates were built in the Augustan era. After a chequered history of sackings by various great aristocratic families, Papal rule and the Napoleonic revolution, the province of Umbria was created in 1861 as part of the unification of Italy. 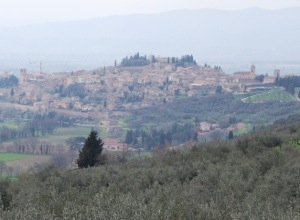 So why Spello? It fitted all of our criteria: an area we had not previously visited, a small town (population @7000), few tourists, a nice property with outside space and wifi. Somewhere where we could blend into local life, improve our (limited) Italian, taste the fine cuisine and wines, appreciate the unspoilt landscape and see its art, architecture and join in with its festivals.

Our apartment is in the bell tower of an ex-nunnery, built in the 13th century, and reputed to be the first convent constructed for the Order of the Poor Clares. St Clare followed the ideals of poverty and prayer exhibited by St Francis of Assisi.

The entrance to the ex-nunnery

We have been trying out our Italian at every opportunity. People have been really helpful and appreciative of our poor efforts. The people of Spello are – understandably – proud of their town, and are curious about new faces. Our hosts are the lovely Anja and Paolo who have been very helpful and informative. Wandering around town we have greeted everyone enthusiastically and have been met with friendly responses at every turn. We have introduced ourselves to the local artisan baker (oh, the rosemary bread….!) and to Luca in the family shop selling a cornucopia of local Italian foods. Luca has promised to help us with our italian in exchange for our helping him out with his English. We have been invited to join in with some of the Easter celebrations (more later) and are keen to do so.

Today we walked for 4 kilometres along the Roman aqueduct which brought water into Spello until it was bombed by the Allies in 1944. The remains of the aqueduct were buried for many years, but have been recently restored and now there is a beautiful walk between Spello and the next village.

The road from Lucerne towards the Italian border winds around snow-capped peaks and through numerous tunnels up to 10 miles long. The rain was non- stop, making visibility interesting and driving conditions hazardous. Knowing we had to eat some miles, we pressed on to the Italian border and beyond.

Four days, four countries. That got me thinking about the fast roads in each of those countries, and about the different attitudes to driving. Now I know I shouldn’t generalise, but I’m going to anyway! Take the UK. Why do we all hog the middle lane or use the outside lane as a speedway track, leaving the inside lane clear?  Our service stations (a grand misnomer) are faceless with fare that is not for the faint hearted. The fast food emporia that clog our high streets (you know who they are) have annexed the food outlets, leaving a miasma of grease hanging in the air. But, on the positive side, our road signs are clear and we are generally polite to other drivers. And so to France. Most of the major roads have just 2 lanes, but the outside lane is only used for overtaking! The traffic is considerably lighter than in the UK, which is just as well as there are many French drivers who insist on driving with the spare arm that isn’t needed for steering hanging out of the window. Road signs are good, other than they rarely display the mileage to any destination; keeps you guessing. And the service stations are clean, bright and have very good food. Even salads. Over the border to Switzerland where the driving is precise and polite. Speed limits are respected and seemingly rarely exceeded. Finally, crossing the Italian border requires sharpened senses. Drivers give no quarter and are oblivious to speed limits or rules of the road. At one toll station my car almost became a Fiat sandwich as cars on both sides sped towards me in an attempt to appropriate the lanes in the name of Italy. It felt like survival of the fittest. Service stations were grubby and the food poor. Road signs were so cluttered that it was difficult  to pick out destinations. And the road surfaces have similar characteristics to the surface of the moon.

Back to the journey; Italy at last. We cheered as we crossed the border! Past the northern lakes, around Milan, beyond Bologna….that was hair-raising. Off the main road to look for a hotel for the night. As luck would have it, we ended up in Imola and found a small, clean hotel close to the surprisingly pretty old town with its grand colonnaded square; delightful. If you think the name is familiar, in 80 AD it boasted a Roman amphitheatre where 2-horse chariots would race. You probably won’t remember that, but for more than 50 years, the Enzo & Dinosaur Ferrari International Racetrack has hosted renowned motor races. On 1 May 1994, the Brazilian driver Ayrton Senna made his final high-speed exit when he crashed into the Tamburello curve at the Imola circuit, on the same weekend that race goers had witnessed the death of Roland Ratzenberger. Mio marito was highly impressed with the action shots of motorbike racing in the hotel, and took to reminiscing about his youth.

The lakeside city of Lucerne is compact and easy to navigate on foot. The dominant feature is the extensive lake, misty today with the mountains barely visible.

The Dying Lion of Lucerne was carved in 1792 into the rock beside a tranquil pool to commemorate the Swiss Guards killed in the French Revolution. Mark Twain described it as “the saddest and most moving piece of rock in the world”. Mio marito thought it was sentimental trash. But look at the lion’s little face…!

The wooden Chapel Bridge with its octagonal water tower is rumoured to be the most photographed view in Switzerland. Built in the 14th century as part of the city’s defences, it has a series of 17th century paintings under its roof, though many were destroyed by fire in 1993; blackened timbers are still in evidence. In the squares of the Old Town the buildings have richly painted facades. It is rather like being in a Hans Anderson fairy tale!

The Needle Dam, constructed in the 19th century, manually regulates the water level of the lake by raising or lowering the wooden “needles”. We climbed to the ancient ramparts with its 9 towers, all of which was largely intact.

This man is no Banksy!

After the flat plains of yesterday, today we have driven through some spectacular scenery, through the verdant, round-topped Vosges Mountains and over rivers on high viaducts. Entering Switzerland at Basle, there were a few tricky manoeuvres before we cleared the city and were once again treated to lush green pastures. Then the Alps hoved into view; magnificent peaks still covered in snow, picture postcard perfect at every turn. In Lucerne we found a hotel straight out of the Grand Tour right on the shore of the lake. Junior suite, balcony overlooking the lake….didn’t take much persuading to settle in for 2 nights, but I did negotiate the price down of course.

Eurotunnel rocks! Or rather it doesn’t. Such a smooth, easy way to travel from England to France. Yesterday was a long day, and we ended up in a soulless Ibis hotel after a long search to find somewhere to lay our tired heads. Best sight of the day was a flock of cranes feeding on the ground in woodland. Weather sunny all day – it’s just like being on holiday!

The bags are packed. Just enough stuff to pack the Mini to capacity, so difficult choices have been made about what is important and what can be left behind. Farewells have been said and last suppers eaten (several times).

The plan is this:

20 March: leave home, overnight stay in Kent.  21 March: Eurotunnel to France. Drive through France, Switzerland and Italy. Not all in a day of course. Overnight stops will be made as necessary.  25 March: Arrive in Spello, Umbria. Magic Spello. At least we are hoping it will be magic.