Spello may be a tiny town, but it houses some of the very finest art works in this region. Those who come here for the day head straight to the fine church of Santa Maria Maggiore where Spello’s art jewels are to be found. 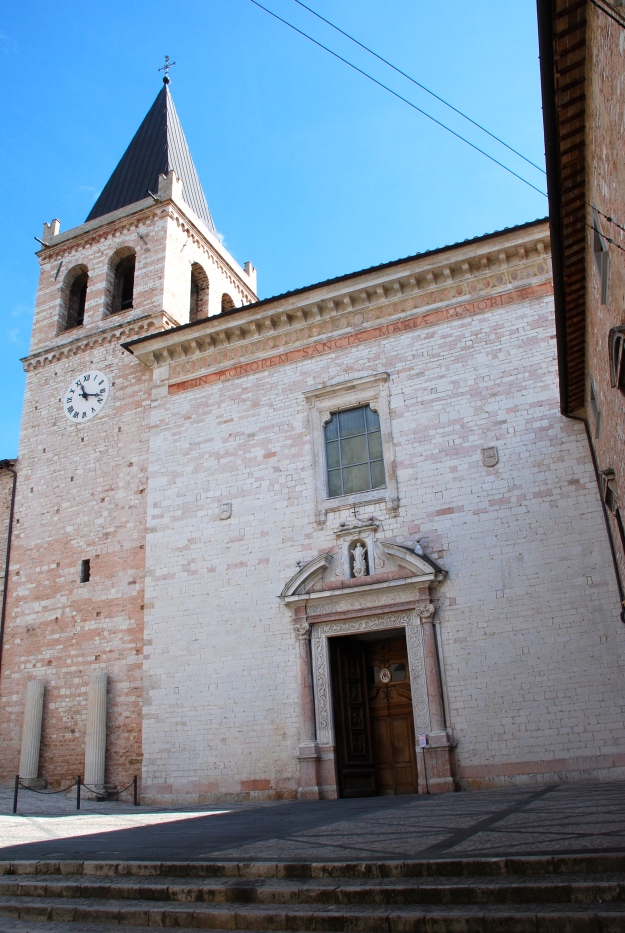 The church was completed in 1285, but its crumbling facade was reconstructed in the 17th century, using the original materials. It stands in a small square paved with medieval cistern covers. The 2 large fluted columns in marble which you can see at the foot of the bell tower are the remains of an earlier, Roman structure; the church was built on an important Roman road that ran through this area.

Inside, there is a single, wide nave and seven altars. The light filters through the many windows, highlighting the rich stucco decoration, paintings and sculptures. But it is the Baglioni Chapel that, rightly, commands attention. The decoration was commissioned by Troilo Baglioni who was the Prior of Santa Maria Maggiore in the 16th century. The artist was Bernadino de Betto, more commonly known by his nickname Pinturicchio – “little painter”. This nickname referred to his short stature, not to his artistic talent.

Pinturrichio joined the Perugia painters guild around 1481, the same year in which he collaborated with the artist Pietro Vannucci, known as Perugino, on some frescoes for the walls of the Vatican’s Sistine Chapel in Rome. Pinturrichio also decorated the (Papal) Borgia apartments and a produced a fresco series for the library of Siena cathedral. He painted the Baglioni Chapel in 1500 to 1501. His work is highly decorative with superb attention to detail, particularly in his figures. Like other artists of his age, the women are depicted as graceful and serene and the landscapes have depth and an air of peace. Pinturrichio is said to have influenced other Umbrian artists such as Raphael, who was apprenticed to Perugino.

The Dispute in the Temple by Pinturrichio, Santa Maria Maggiore, Spello

Baglione can be seen at the far left of this picture dressed in his black habit, standing next to his treasurer in a blue robe holding a bag of money.

The floor of the Chapel is made of small, glazed majolica tiles dated 1566 from nearby Deruta, showing winged horses, birds and plant motifs.

Also represented in the church is Perugino, whose 2 works here date from around 1521.

Madonna and Child with St Catherine and St Biagio

I have mentioned before that we are staying in part of the ex-nunnery of Santa Chiara (Saint Clare). The church houses an oil painting from this house which was formerly a panel used to partition the closed-order nuns from the public. This painting, from around 1700, is attributed to Carlo Lamperelli, who was born in Spello. Unfortunately I have struggled to find a good photograph of this painting which, even in the flesh, is rather dark and unclear.

The church of Santa Maria Maggiore is a treasure house. The Baglioni Chapel is a masterpiece. I don’t mind paying my 2 Euros to light up these frescoes as I fully understand the need to protect them from excessive light. However, an opaque glass panel has been constructed across the front of the Chapel, restricting visitors from seeing the frescoes without paying, and since there is not always someone on hand to pay your money to, I saw many visitors leave the church without having had the chance to view these masterpieces. Aside from that, the glass barrier is extremely ugly and it ruins the lines of the church. Remove this monstrosity, powers that be. Charge us to light the frescoes like other churches do, with pay and display lighting!