Leaving Castiglione del Lago, we headed north around Lake Trasimeno to the town of Tuoro, which is unremarkable other than it was close to the site of the Battle of Trasimeno which took place during the 2nd Punic Wars.

The Battle was fought on 21 June 217 BC between the Roman army, under Gaius Flaminius, and the Carthaginian troops, led by Hannibal. Hannibal planned a massive ambush of the Roman army along the shore of the Lake. Here, a narrow lakeside passage opened out into a confined plain, restricting the Romans’ ability to adopt their normal battle formations. Under cover of a morning mist, once the Roman troops were contained on the narrow plain with their rear blocked by Carthaginian cavalry, Hannibal’s men poured down from the heavily forested hills and routed the enemy. Hannibal 1, Rome 0.

Hannibal preparing for battle. Well, it was difficult to get a photo…..

It is estimated that around 15,000 Romans were killed that day, whilst Hannibal lost around 2,500. Hannibal almost suceeded in overpowering Rome and he was Rome’s biggest threat for many years. Although he eventually lost the Punic Wars, Hannibal is today remembered as one of the finest generals in ancient military history, and the Battle of Lake Trasimeno is considered to be an outstanding example of military tactics.

And if you are wondering what happened to Hannibal’s famous elephants, most of them died during the harsh, northern Italian winter.

Fired up by tales of derring-do, we continued on to Passignano sul Trasimeno, built on a rocky promontory overlooking the Lake.

The centre of Passignano still retains its medieval walls, but there is little left of the old town other than the remains of La Rocca di Passignano, a fortress dating from the V-VI centuries, due to bombing during the second World War. 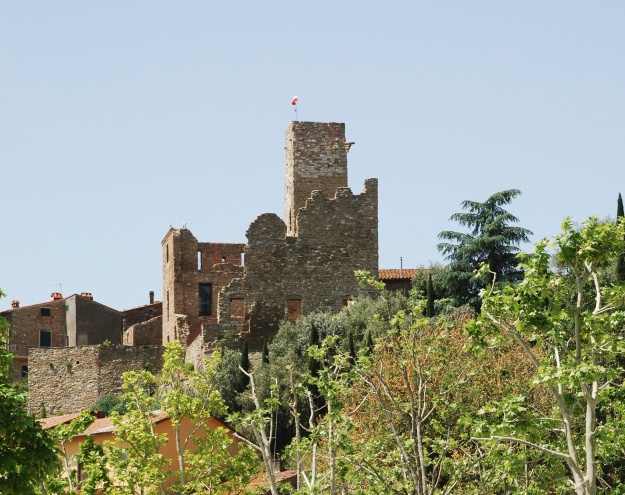 The more modern town has sprawled to the Lake’s edge and attracts tourists mainly because of its access to the Lake’s islands by boat.

Fishing – both commercial and for leisure – is also carried out here. Tench, eel, pike, carp and perch are all found in the Lake.

There is also a small but pretty marina.

There were few boats out on the water…

It’s not difficult to idle away a few hours just looking….

There were lots of ducks, birds and various other wildlife on and around the Lake.

How green is this lizard? Lake Trasimeno

Right Mabel – let’s get those 2 tourists down there…!

Roll on the next adventure!